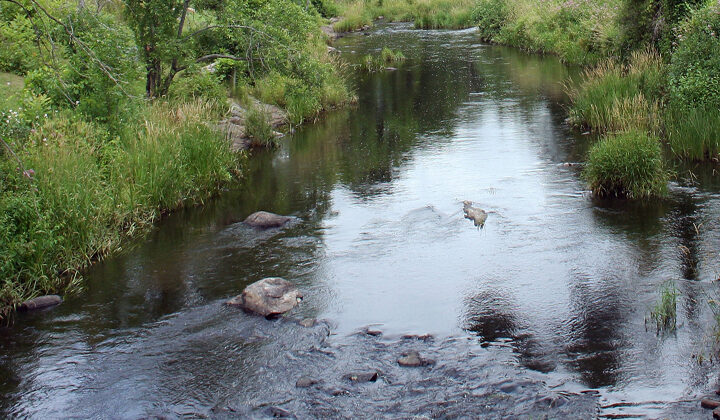 Shaving his head and donning the robes of a Zen monk, Matsuo Basho and his travelling companion and fellow monk, Sora, set out on a journey between Miyagino and Matsushima, Japan, in the spring of 1689. From early 1690 into 1694 Basho wrote and revised his “travel diary” Oku-no-hosomichi the narrow road within; the narrow way through the interior. Oku-no-hosomichi is much more than a poetic travel journal. Its form haibun combines short prose passages with haiku; yet, the heart and mind of this little book, its kokoro, cannot be found simply by defining form. His account grew out of arduous studies in poetry, Buddhism, Taoism, Confucianism, Shintoism and some very important Zen training. Basho was a student of Saigyo, a Buddhist monk-poet who lived five hundred years earlier (1118 – 1190), and who is the most prominent poet of the imperial anthology, Shinkokinshu. Like Saigyo before him, Basho believed in a co-dependent origination, a Buddhist idea holding that all things are fully interdependent, even at the point of origin.

And like Basho before him, Chris Faiers, an English language haiku poet, meditator, custodian of a Buddhist retreat, ZenRiver Gardens, believes in the interdependence of all life, the reflective power of creative meditation, the reverence for walking and dreaming. Faiers, a long time devotee to the Japanese literary forms of haiku and haibun, has established himself as a haijin (teacher/poet) and leading voice in the haiku community. His poems have appeared in forty anthologies and scholarly works including those published by McGraw-Hill and Simon & Schuster. His poems have been praised by major Canadian poets Al Purdy and Irving Layton. Even George Harrison (of Beatle fame) enjoyed his poems in the late 60’s.

Faiers’ newest collection, ZenRiver Poems and Haibun is a little book filled with a large heart mind (kokoro) spirit. Although Faiers is the main contributor, there are selections also by Stan White, Warren Fraser, James Deahl, and Katherine Gordon. The book consists of an introduction, seasonal haibun, and three haibun written during an earlier period: A Psychedelic Basho, Lavenham, and Formentera.

The haibun is a literary form that consists of a short prose piece concluding with a linked haiku or a longer prose piece with interspersing haiku; haiku being that (often) three lined (or shorter) seventeen syllabled (or shorter)grasp at the aha moment.  January Thaw, although not the strongest piece in the collection, serves as an introduction to the poetry and to the new year to follow. Filled with temperature reports and the antics of his beloved dog, Chase, the first haibun concludes with a haiku by Warren Fraser, containing a beautiful image of snow drifting by sumacs. It is not until Faiers heads into Hangin’ With Bubo that things get really interesting. Faiers’ description of the Ontario trails near the old quarry hamlet of Malone and references to Buddha, sundogs (parhelions)  and rainbows, reminds a reader of the grace of his mentor, Basho, and the linked haiku

a veil is required

becomes stronger with each subsequent reading.

The haiku sequence titled Crow Visits Wolf includes haiku and haiku-like poems. Perhaps the Zen presence is giving way to words like “consciousness” and “blue sky practice” appearing in haiku when (traditionally in North America) abstract notions have been omitted. blue sky mind crow call/ Milton Acorn? might have been better suited to a longer homage to the Canadian people’s poet.

In Snow Melt Meditation, Faiers’ explains his meditation, “ to not slow down the process with any rituals of any kind …” and later “I’ve been practicing meditation for forty years, as long as I’ve been writing haiku. Sometimes I’ve been a devout and regular meditator, but more often meditation lightens my “monkey mind” thoughts… occasionally I compose poetry during inspired moments entering or leaving a session, and every now and again, I’m privileged to sit with the Buddhas.” We are privileged to join Faiers on his self exploration, his experience of white light, as he writes, “the river carrying the white lightness of the spring snowmelt so bubbly and fast flowing.”

As the haibun move through the seasons, so we as readers progress through daily meditations and reflections. Not a morsel goes unnoticed by the keen senses of this finely tuned poet. We find great blue herons, shaman carvings, haunted pumpkin walks, palm frond reflections, the flap of prayer flags, the carcass of a frozen whitetail deer. One of the finest haiku in the collection is this one:

fill the basin below

With its allusions to opposites (the dry leaves, the waterfall) the presence of absence, the shape of the dry basin clearly outlined against the growing moss covering fallen stumps which gives its own olfactory resonance, this haiku captures an ordinary moment with extraordinary skill.

If the seasonal haibun give us glimpses of Faiers’s thoughts as he hikes (present day) through the ZenRiver Gardens with his trusted companion Chase, then it is the ending haibun that give us great chunks of his heart as an earlier poet, a peace activist during the Vietnam War era, a  traveller in Britain with an aging father, an explorer of the remote and mysterious island of Formentera, off the coast of Spain. It is in this last piece that prose becomes its sweetest and the linking haiku, a gem.

“The next day we roamed around looking for a place to rent. This was a dharma time for me, and I met an American who was about to return to the States. He offered to let me rent the crude farmhouse he had been living in, as he still had a month’s rent left. I paid him a few hundred pesetas, and Mette and I prepared to move in the next day. The farmhouse was stone, and beautiful in a rustic way. There was a well in front, and the name “Maria Jerome” painted over the front door. There were only three rooms, a kitchen, a bedroom and a den with an open fireplace, but to us it was a mansion. “

As in every poetic collection since the beginning of written time, some offerings are stronger than others. Faiers is a poet of constancy; he keeps true to the lineage behind him and the vision he sees in front of him. He is quick to add his own twists and turns, even keeping a keen sense of humour (frogs croak/spring horniness/April Fool’s Day). The kokoro of this little book is mighty.

Terry Ann Carter is a haiku/ tanka poet who travels the world with a small spiralled bound notebook. She has composed poems in the rainforests of British Columbia, the mountains of Peru and Tokyo Central Station. She participated in the Basho Festival in Ueno, Japan, in 2004 and has given readings in Canada, the U.S., Japan, Taiwan, China, Singapore. Her poems appear in haiku and tanka journals world-wide.