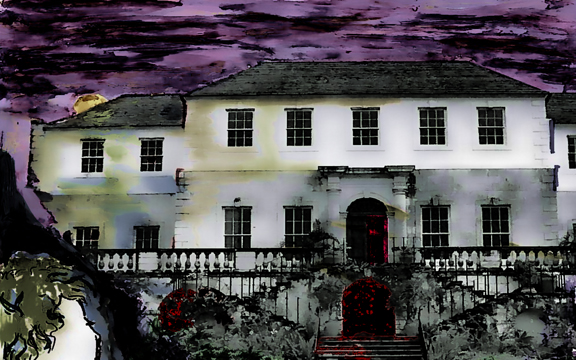 Santiago’ Purple Skies at Morning’s Light is a ghostly coming of age Speculative Fiction novel. It is so well told it reads like a memoir. The story is seen through the eyes of Irish-Canadian teenager, Kathleen Dunkley, who is confronted by apparitions that haunt her all the way to Jamaica where dramatic events unfold.

This haunting Speculative Fiction novel will carry you from Ireland, to remote northern Ontario, to the big city of Toronto and all the way to Jamaica. The teenaged heroine, Irish-Canadian, Kathleen Dunkley, was desperate to leave her haunting pasts and horrific tragedies behind her.

Through her coming-of-age journey, Kathleen soon learns that the witch of Rose Hall was originally from Irish stock and there is also a mysterious ghost boy called Santiago, inhabiting the house where she is staying. Kathleen is left to ponder why spooks have caught up with her, and if her new found Chinese-Jamaican friend, David Chang, can help to defend her from harm.

This moving story of survival is a page turner for just about anyone that likes adventure.

Teenaged, Irish-Canadian, Kathleen Dunkley, is a survivor in this engaging Speculative Fiction novel. She is exposed to some of life’s most trying traumas and still manages to come out on top even as she is followed by the incessant howling of a seemingly ever-present wolf.

Travel from Ireland, to small town Canada, to the hustle-bustle of Toronto, then with a strange shift in plot, all the way to Jamaica with this young heroine who has to overcome her haunted past and what seems like real live ghosts. Be prepared to suspend your disbelief as you read this, believable, memoiresk style fiction.

Despite tragic upheaval, forced relocation and haunting memories Kathleen forges ahead into a new beginning, where she makes new friends and experiences unexpected visitations from the spirit world. Unknown to her the plantation house she is staying in, near Montego Bay, is haunted by a mysterious long-dead Spanish boy, Santiago, for whom the house is named.

Bernadette Dyer brings suspense and mystery to her well written story with real life characters and realistic dialogue. A long with Kathleen’s sightings of strange phantoms, she is also subject to visitations from the spirit of the White Witch of Rose Hall, who had lived in the neighbouring plantation and was rumoured to have murdered plantation-slave lovers. Events come to a head when Kathleen and her new-found friend, Chinese-Jamaican, historical researcher, David Chang stumble upon undisturbed bones of mythical long dead slaves.

Bernadette Dyer successfully blends the ghostly activities of fiction with well researched local history of Jamaica. Colourful history, infamous spirits and ghostly activities cannot compare to the most evil of all, the White Witch of Rose Hall, a long dead notorious slave owner from Jamaica’s historic past. By the time you finish reading this spell binding novel you might just be a believer in the supernatural.

You don’t need to go to Jamaica. You just need to read Santiago’s Purple Skies at Morning’s light. You will see, taste, smell, hear – and quite possibly fear – Jamaica in this rich, heartfelt and, at times, spooky coming-of-age tale. Like Dyer’s charming young heroine, Kathleen Dunkley, you may never want to come home again.

author of “A Time and a Place” – Five Rivers Publishing,

Director of Infrastructure Support at CBC.

Driven out of damp and cold Bristol by bad health, Jonathan Gunn, his wife Wilemina, and their two children, Dunstan and Eliza, emigrated to Jamaica in the early 1920s. They built a house outside of the town of Hedley, and the children made friends with the locals, a diverse group including not only native Jamaicans but Chinese and Jewish immigrants as well. The narrative traces Dunstan and Eliza’s formative years and their close friendships with Peter and Maggie Chung. Both the need to travel for education (for the boys) as well as the outbreak of World War II broke up this tight band, bringing into sharp focus the social, economic, and racial distinctions rampant on the island.

As the four pursue different paths, issues of gender and the limited options for women take center stage. Eliza risks her safety, her mother’s love, and society’s approval, as she chooses to follow her heart with Lucas Paynado, a Jamaican who once lived on the Gunns’ property but who now has political ambitions. Maggie turns away from what she thought was love to hide from a situation of disgrace. Wilemina also has to change her long-held beliefs, born of naiveté and her upbringing in Britain.

Dyer’s story is simply told and is a haunting tale of Jamaican life for locals and immigrants during the first half of the 20th century. Local history and folklore are interwoven with imperialist overtones prevalent during the time. Dyer provides an honest, unfiltered perspective not often reflected in mainstream US or UK novels about Jamaica, which is a welcome contrast to narratives that soft-pedal the issues underlying the area’s history.