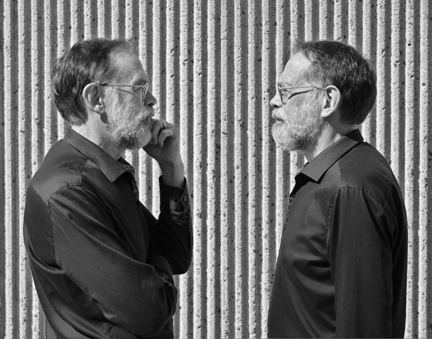 John Tyndall listens to relatives, friends, and mentors. Listens to his medical caregivers. Listens to bagpipers, storytellers, and pianists. He listens to people with love. His poems in this new book, Listen to People, are a true testament to his skill as a poet and his listening.

John Tyndall’s fourth book of poetry, Listen to People, comprises three sections: Lots of Love, Undetermined Significance, and Listen. Lots of Love features poems about his late father, his wife and son, and also cousins who have recently passed on. Tyndall’s father’s voice speaks of times in the Depression and friends lost in World War II. Tyndall’s wife dances before she can talk, while his son shares the sound of rain in Alberta via his cell phone. Undetermined Significance deals with Tyndall’s autoimmune disorder, MGUS, which impels him to listen closely to medical caregivers. Rogue antibodies become drunken frat boys as Tyndall’s limbs buzz like distorted guitar solos. His chapter, Listen, returns to the voices and the reminiscences of friends and colleagues who have succumbed to or survived their own health crises. Gradually the poems seek redemption in work, play, and love. Tyndall listens to others as he would listen to himself.

Many years ago, the late poet, Margaret Avison, after reading John Tyndall’s early work, said only, “You need to listen to people.” While preparing the manuscript for this collection, he realized that most of the poems involved stories and sayings of relations and friends, both living and dead. Thus, Tyndall’s fourth book is entitled Listen to People.

The book opens with poems about Tyndall’s father: relaying his usual goodbye, “Lots of love;” telling the story of cousin Black Jack Tyndall, who owned an inn and couldn’t help but sample its fine wares; and describing the lives and deaths of three friends whose names appear on Wiarton’s cenotaph. Further along in this first section of the book, Lots of Love, Tyndall retells a story from his wife, Diane Halpin, how she learned to dance before she could talk. He hears from his late cousin, Ron Smith, to “Mind how you go.” Life is short and the sailing can be rough. Another cousin, Joe Thede, re-enacts the life of great-great-great grandfather, Ludwig Wideman, the only rebel killed outright on Yonge Street during the Rebellion of 1837.

A personal health crisis interrupts these poems of remembrance as Tyndall recounts the discovery and diagnosis of his auto-immune disorder, MGUS (Monoclonal Gammopathy of Undetermined Significance). Tyndall listens to caregivers: his general practitioner; a doctor of internal medicine; neurologists; haematologists; and the medical technician who applies electrodes to test his nerve pathways. He even hears the nasty antibodies loose in his body as voices of keg-fuelled frat boys. The voice of Margaret Avison, from a published interview, returns to give Tyndall an amazing tip how to walk without losing balance. Coming out of surgery for a broken fibula, the nurses are surprised that his peripheral neuropathy makes recovery painless. At the end of the book’s second section, Undetermined Significance, Tyndall reveals which recording by Miles Davis mimics the feelings of his neuromuscular symptoms.

Since MGUS is a slowly progressing ailment, Tyndall’s life of listening continues in the third section of this collection, Listen. Live music in a jazz club in Detroit speaks of cooperation and shared wisdom to him and his librarian colleagues. Years later, while one of his co-workers succumbs to cancer, another tells how she visualized the destruction of her tumour and survived. One library assistant, while growing up in communist Hungary, falls in love with the voice and songs of a famous performer from Glasgow, Scotland. When Tyndall admits to himself that he will never walk the Camino to Santiago de Compostela, he dreams of partaking in it in the company of holy strangers. Alice Munro enters Tyndall’s place of work to ask him a question. During a slow-pitch baseball game, the voice and hand commands of his coach ensure him a stand-up triple instead of being called out at home plate. At the end of the book, Tyndall hears the voices of distant night-swimmers while he floats under the stars; he haunts the windows of his childhood home, looking out and listening.

Current Reviews of Listen to People:

Listen to People by John Tyndall, a review by Susan Downe

As I read this elegant collection of poems, I think of Parsifal, knight-errant, who asked a genuinely concerned question of the Fisher King, who hopelessly ruled over a ruined kingdom, the King himself in agony with an incurable wound: “What ails thee, uncle?”

The response is a miracle – the healing of all – King, the kingdom (and us: we are all pilgrims, not done yet.)

John Tyndall’s compassion, his curiosity, that fondness, are intrinsic to these stories, stories of the saints among us, living and the dead; we are told that at his death, John’s father transformed into one of his favorite birds, the Northern Flicker, and flew away, high and higher, calling, calling.

We meet John’s son, John’s wife, friends, the Beatles, his medical team, and at least one visitor to John’s workplace, Western University’s library: “Come back, Alice, ask me another question.”

John and fellow-poet, Seamus Heaney, are of similar mind, to be pleased, find gladness on this Earth. Heaney wrote in Gravel Walks (and instructed it be chiseled into his headstone) “Walk on air, against your better judgment”; wonder and gravity balanced, John.

author of a fictional memoir, Juanita Wildrose, My True Life

and a poetry collection Little Horse.

To Glisten is to Shine With a Quaver: A Review of Listen to People by John Tyndall

The words listen and glisten are like fraternal twins, so alike they could have come from the same mother on the same day. John Tyndall’s latest collection of poems, Listen to People, glistens. Here are poems written by a man who listens with his head, his heart and his feet, not to mention his socks! The opening poem “White Oxfords” is a tender account of his father’s last days and, finally, his death. After a graceful series of unexpected images, some sad, some hilarious, others exhilarating, the poem comes to a gently intimate conclusion, describing a sound just this side of silence, that resonates across our universal human experience of loss and love.

The rest of the poems in this first section reflect a wisdom gained only through living with an ear to the world; the poems are a cacophony of a life lived while listening with perfect attention from the Yuck Yuck of the ant-eating Northern Flicker to the Hssst of a man who cannot escape his  “hereditable” pact with a distance ancestor: Whom shall we overthrow/tonight.

The second section of the book invites the reader to accompany John Tyndall through a serious neurological disorder to which there is no cure. The poems are not what you might expect. The brilliant “Kappa Lambda” personifies Myelin-Associated Glycoproteins as frat-boys having a “kegger” in his body. It’s a wild and crazy party that you both want and don’t want an invitation to. The final poem of this section, “Go Ahead John,” will break your heart and make you smile. You may even want to dance.

A life of deep friendships, an appreciation for music beyond what I will ever, sadly, comprehend, and thoughts about one’s life viewed from a distant place where both mystery and contentment reside only begin to describe the final section of poems, “Listen.”

To glisten is to shine but not with dull constancy, as the light from a lightbulb. No, to glisten is to shine with a quaver, to wow out unexpectedly into the outer spheres of the universe and/or the inner recesses of the self. To shine with a light smaller than the head of a pin— sharply, dangerously, like the seed of the mystery that resides in the still centre of one’s existence. A poem can be like this. A book of poems can be like this. Listen to People is like this. Read it.

the author of, worn thresholds and the walnut-cracking machine,

Her poems have appeared in Canadian Forum, CV2, Grain,

Malahat Review and The Literary Review of Canada.