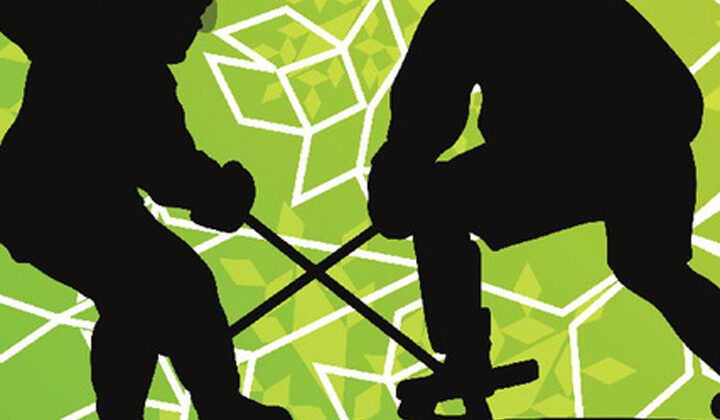 All in Good Time

Title: All in Good Time All in Good Time is an authentic story of camaraderie, rivalry and national pride. Don Gutteridge is a story teller through and through. His skill at spinning yarn is seen all the way through this novel All in Good Time.  This Novel is well worth this second life published by HBP.

The time is February, 1945. The War in Europe is raging towards its last catastrophe. The people of the village beside the Great Lake are waiting for war to end; for the incursion of a US hockey team to test the local mettle; for the arrival of the Governor-General; who is to bless the town with his royal presence. All eyes are on the commander, Reeve Horace MacIntosh, who must revive slumping morale, inspire his young combatants and embody the village virtues of humility and pride. All goes well until this masterful, middle-aged politician sets his sights on the sensuous Gloria Sawbush; until the snows come late and vengeful; until ambition strikes, hot and consuming. The result is a week of bizarre events in which the follies and dreams of the good citizens of the Point are exposed and exorcised.

In All In Good Time by Donald Gutteridge, as the Second World War draws to a close in Europe, the residents of a small village on the border of Canada and the United States count the cost of the conflict in their menfolk that will never return from the conflagration and in their sense of loss of a way of life. Living so close to the “mighty” United States had always given these Canadians a feeling of inferiority but one thing they knew for sure was that they could whip the Yankee Boys at their national passion – ice-hockey. When the local Reeve (Mayor) of the village challenges the team from across the bridge to a game, the entire village rallies behind the Canuck pride. The Reeve, though, has ulterior motives for organizing the game. He is determined to use it to catapult himself out of the local political scene and his lowly mayoralty and enter the big boys’ world of national politics. He wants to be a member of parliament for the region and, as he knows that all politics require back-door deals, he is prepared to do whatever is necessary to achieve his ultimate goals; to be selected for higher office, to leave his provincial wife for the younger and more politically astute and connected Gloria Sawbrush and, of course, to launch his career on the back of a massive local ice-hockey victory against the despised Yankee Boys from across the bridge. The Reeve has his strategy and path meticulously planned out but… even the best-laid plans of mice and men, eh…

All In Good Time is not a long book by any stretch of the imagination and I was left feeling there could be more… and perhaps there still will be in future books. We shall have to wait and see. Author Donald Gutteridge presents us with a cast of characters that are quirky caricatures of small-village life. As someone who comes from New Zealand, I was able to easily identify the animosity between the “little brothers” (the Canadians) and the “big brothers” (the Americans). We have a similar love-hate relationship with the Australians. The author’s writing style was so warm, descriptive, and enticing that you could literally feel the mind-numbing cold that crept into everyone’s bones during the vicious winter the residents of The Point were suffering through. Despite the humor being subtle, it was genuinely clever and ironically funny at times. I especially liked the arc of the young woman, believing her husband to be dead, who finally decided to tend to her own emotional and sexual needs with a young music teacher. The sexual tension was beautifully built up by the author. The highlight was the Dickenesque way the author forced the Reeve to confront his past decisions and past inactions and to realize the possible errors of his ways. This is a highly readable story and one I thoroughly enjoyed.

The author of 7 books including,

“Just a Drop in the Ocean”

All In Good Time is a work of fiction in the interpersonal drama, humor, and slice of life sub-genres, and was penned by author Donald Gutteridge. In this gentle work which is suitable for readers of all types, we visit a small village where local lives are interrupted by a series of different events. Centered around a hockey game in which the villagers compete against a neighboring town, the focus is on the town mayor whilst he pits his fortunes against the match, only to find that pretty much everything that could go wrong to scupper his plans does and with gusto. What results is a lovely, light-hearted look at where we are in life.

Author Donald Gutteridge has crafted a wonderful slice of life drama which is charmingly Canadian from cover to cover. One of the essentials for this genre is to give a sense of immersion in the town, its people, culture, and lifestyle, and I felt like I knew so much about Reeve Macintosh and the people he represented. One of the real triumphs of the work is its dialogue and narrative style, which

again gives so much of that local flair and many humorous, snarky and witty lines that add a bit of bite to everyday events. This skill in the narrative takes us through the twists of the plot with a confident and entertaining guide. Overall, I would highly recommend All In Good Time to readers who enjoy concise and cozy reads about the bizarre twists and turns of seemingly ordinary lives.

including “Fallow Heart” and “the day the world ended”

All in Good Time by Donald Gutteridge portrays Reeve Macintosh as the leader of the people. He is a friend to all, trusted, and looked up to by the people in his village. His three successive terms rivaling those of the legendary Cap Dowling back in the 1880s is proof of that. He believes the future of this village lies squarely and heavily on his broad, garbage-besmirched shoulders. Determined to pursue his dreams and aim higher, Reeve Macintosh includes a hockey game against another town in the festivities. A real hockey game that means something with buoyant winners and humiliated losers; the people’s individual cheers would be uncompromised and necessary. Little does the Reeve know that things rarely turn out the way he wants them to.

Donald Gutteridge portrays All in Good Time in a series of stories that are all interconnected with each other to form a bigger picture. It tells of the lives of the different people living in a village, but the story mostly focuses on the village’s Reeve, his daily life in the village, and his attempts to achieve his dreams. The story is set at an easy and light pace, although oftentimes there are undercurrents of serious issues often being brought up, like affairs kept hidden and quiet or the war going on as everyone tries to live their day-to-day life. The characters of the story are all painfully human. Their actions and decisions are often foolish and this adds to the story. It made it easier for me to imagine them as they are, as though they are real people. I got frustrated by their betrayals and exasperated by their foolish decisions, which is a good indication that the story left an impact on me. This book led me through a roller coaster of emotions and has helped me understand not just the Reeve’s story, but the villagers’ stories and struggles as well. The culmination of their tales all come together in a complete circle and neatly form the unique plot of All in Good Time.